For your first time in Florence your official licensed guide of Florence suggests a nice walking tour introducing the history of the city and including the highlights of the ancient centre.
Starting from the central Piazza della Repubblica (Republic square) where the Roman Florentia used to be, we reach the religious centre of Florence. The imposing Cathedral (or Duomo) with its astonishing marble decoration, the magnificent campanile di Giotto (Giotto's bell tower) and the beautiful octagonal Baptistry make this place a unique experience.
Enjoy the atmosphere of the medieval cobblestone winding streets, the high tower houses, the tiny churches, the loggias. Admire the imposing Signoria Palace, the seat of the city Government, with the battlements and the highest tower in the city, Arnolfo's tower, soaring above the Signoria square. The square is famous for the numerous statues which make it an open-air museum: the Perseus by Cellini, the Rape of the Sabine women by Giambologna, the Neptune Fountain by Ammannati. Aside the Signoria Palace stands another huge building: the Uffizi (the Offices), seat of the world famous painting collection Uffizi Gallery.
Through it we reach the Arno river where you can have a wonderful panorama: the riversides and the hills surrounding Florence. Immediately at your right-hand side the astonishing view of the Ponte Vecchio "crowned" by the little buildings which make it so famous. Crossing the Ponte Vecchio admire the shining shop windows of the jewelleries and follow the Vasarian Corridor running above the bridge. Following via Guicciardini we can make our way to the Pitti Palace, the last residence of the Medici and now home of several museums, including the Boboli Garden. We are now in Oltrarno (beyond the Arno river) a nice area very famous for the still working artisan workshops and walking through narrow alleys you can really see men at work: gilders, frame carvers, silversmiths. On the way back to the main side of the city we cross the Ponte Santa Trinita (Santa Trinita Bridge) from which you have another nice view of the Ponte Vecchio from another perspective. Then we walk along the fashionable Tornabuoni Street and we reach Palazzo Strozzi. Entering the lovely courtyard of this huge mansion house, built for the Strozzi family in the XV century, you may have a step backward to Renaissance time . Enjoy the tour!! 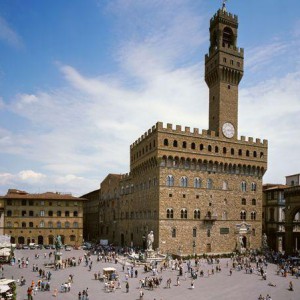 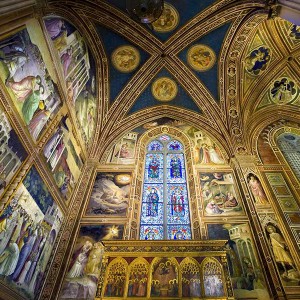 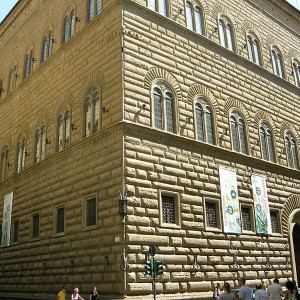