If you are fond of Renaissance paintings do not miss some of the most famous cycles of frescoes of the XV century in Florence. Therefore your private licensed guide of Florence suggests un itinerary including the visit of the magnificent Church of S. Maria Novella and the little Brancacci Chapel in the Church of Carmine.
The Church of S. Maria Novella gives the name to the square and to the main train station which is behind the abse. The building belonging to the end of the XIII century, amazes for the astonishing faÃ§ade, a white and green marble in-lay work, designed by the architect Leon Battista Alberti who received the commission by the Rucellai family, as we can read below the main gable with the date 1470.
Entering from the side of the church, the structure shows its gothic lines, with the ogival arches painted in green and white, producing the illusion of a marble decoration.
Crossing the nave, the magnificent Trinity by Masaccio strikes the attention. The famous fresco is considered an icon of painting of Italian Early Renaissance. The figures stand out of the back ground which gives the illusion of a architectonic space, very probably designed by Brunelleschi. In the main Chapel, once patronage of the Tornabuoni family, are the very famous frescoes by Ghirlandaio, painted at the end of the XV century. The Stories of the Virgin's and Saint John the Baptist's lives are extraordinary examples of Renaissance Florentine painting, but also an incredible repertory of fashion and style at that time.
The second destination of our itinerary takes us on the other side of the river, the so called Oltrarno (Arno is the name of the river and Oltrarno means beyond the Arno). The Brancacci Chapel is inside the Church of Carmine, built in the second half of the XIII century, when the Carmelites settled on the other side of the river and built their monastery. Passing through the cloister of the monastery, renovated in Renaissance, we reach the famous chapel. The frescoes of the Brancacci Chapel, made by Masaccio by 1428 (date of his death, when he was only 27 years old), represent a milestone for Early Renaissance painting. Despite the small dimensions of the chapel we are in front of an imposing masterpiece because of the figurative power. Without showing disrespect towards the other painters who worked in the chapel too: Masolino (with Masaccio) and Filippino Lippi (at the end of the XV century), Masaccio's figures stand out in the Florentine painting with the same solidity of Brunelleschi's dome in the sky of Florence. 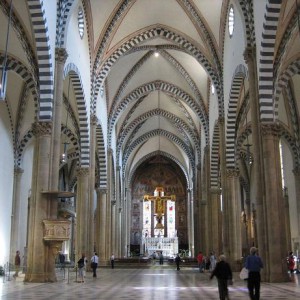