This time I want to propose a mould-breaker tour. Florence is full of churches, some of them are very famous, large and rich of history and art, for this reason world famous and busy. There are very many more you can see by chance, turning around a corner or reaching a little hidden square. Some of them are well know by Florentines, but they are not included in the traditional tourist path. Would you like to follow your licensed official guide of Florence through this unusual walk? You will not regret.
Let’s start from the little church of Santissimi Apostoli, not far from Ponte Santa Trinita. It is an ancient church which dates back to end of the XI century, in Romanesque style, with marvelous green marble columns. A peaceful atmosphere accepts us in a reassuring half light full of spirituality. The church is tied to the tradition of the Explosion of the Charriot, an event held on Easter Day, because the church preserves the flint stones brought during the First Crusade from the Holy Sepulcrum in  Gerusalem.These stones are used to light the Paschal candle. Inside the church are  important masterpieces of XIV and XV century art, among them the tabernacle of Andrea della Robbia in glazed terracotta and the large painting representing the Immacolate Conception by Giorgio Vasari.
The second stop of our tour is the Church of San Remigio, behid the Signoria square. It is another ancient church, still existing in 1040, which was built on the remains of an hospice for French pilgrims who reached Rome along the Romea road. This is why the church was dedicated to Saint Remigio, bishop of Reims. Nowadays the church shows a gothic style due to a renovation done in 1350 with the money of several rich families such as Alberti and Pepi. On the cross vaulted ceiling we can still admire frescoes belonging to the XIV century representing saints.The church preseves  other important masterpieces such as the Madonna and baby Jesus (end of the XII century) by the so called Maestro di San Remigio and on ancient pipe organ built by Giovanni Pietro Contini in 1584 and extended in XVIII and XIX centuries.
For our third stage I suggest the Church of Saint Ambrose, in the homonymous district. This one also is an ancient church, whose foundation is probably back to the IV century when Ambrose, bishop of Milan, passed through Florence. Expanded and renovated through centuries, nowadays it shows a relaxing Renaissance style nave with grey sandstones elements which play with the white plaster of the walls. The church is very famous for two Eucharistical miracles which took place in the XIII century and in the XVI century and  the precious relics are preserved in the Chapel of the Miracle of the Sacrament. Despite the plain façade, the inside is very neat and rich of masterpieces of different periods. Once the church commissioned important paintings such as the Madonna and St.Anna by Masaccio and Masolino, the Crowning of the Virgin by Filippo Lippi and the Pala di Sant’Ambrogio by Botticelli, which are no more there, but preserved in The Uffizi Gallery. Anyway we can admire the beautiful frescoes by Cosimo Rosselli, recently restored.
Some important artists were buried in this church.
All these churches have a reduced timetable for visitors due to the fact that they are still run by parish priests, therefore our visit has to consider it, in order not to find them closed. 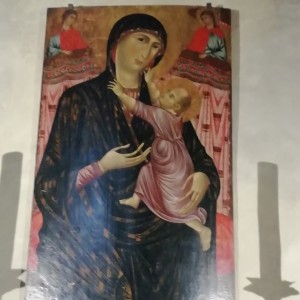